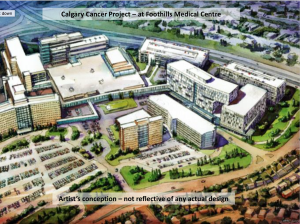 Calgary Cancer Project at Foothills Medical Centre – Rendition of new Cancer Centre which is expected to be 1.2 Million square feet. Traffic impact assessment to be released in early 2015. Community requests council to table disposition of municipal reserve until major major traffic and transit studies have been completed.

At the special UHCA meeting on Thursday, December 4, 2014 community attendees made a resolution to request that disposition of the Municipal Reserve land at 3020 – 16th Avenue N.W. (at the corner of 16th Avenue & Uxbridge Drive NW) be deferred by City Council until two main studies have been completed: the Calgary Cancer Project – Traffic Impact Assessment (CCP-TIA) and the NW-HUB Transit Enhancement Study. The vote on this resolution was unanimous.

We need as many residents as possible to attend the Calgary City Council public hearing on Monday, December 8, 2014 at 9:30 a.m. in the Council Chambers at City Hall.

Item 8.8 on the agenda concerns the disposal of the Municipal Reserve land at the corner of Uxbridge Drive and 16th Avenue N.W. We urge you to read the supporting documents for this agenda item that have been posted on our website. Please keep checking the City Council agenda for the December 8th meeting in case more documents are posted.

Background Information
We believe that having the information from the CCP-TIA is of critical importance to the proper study of the intersection at 16th Avenue and Uxbridge Drive/29th Street N.W. Although plans for the new Cancer Centre are still evolving, we know that the new development will be approximately 1.2 million square feet and that the CCP will include approximately 1650 new parking stalls. Community members have been attending meetings on the CCP and the CCP-TIA. It is expected that a draft CCP-TIA will be available for community comments by January 2015 and that the final document will be completed by February 2015.

“5.3.1 Municipal Reserve
1 Incorporation of part or all of the municipal reserve lands located at 3020 16 Avenue NW into the overall redevelopment of the Plan area is encouraged and supported by the Plan, provided that:
A. any open space that is transferred from the municipal reserve lands, through sale or other means of transfer, shall be subject to Council approval and maintained as publicly accessible open space elsewhere in the Plan area, exclusive of streets, sidewalks, and pathways; and
B. City requirements, including utility, transit, pedestrian, and cyclist facilities, and recommendations from RouteAhead and the Northwest Hub Transit Service Review, are reflected in the design of the southern edge of the Plan area in accordance with the policies in Section 5.2.4 of the Plan.”

The NW-HUB Transit Enhancement Study is not yet completed. Due to other higher priority transportation needs, such as power upgrades for the C-train, and funding shortfalls, the NW-HUB project is currently unfunded. On September 8, 2014 Calgary City Council voted to include the NW-HUB (unfunded) along with the Traction Power Upgrade (funded) “as part of the updated 10-year Investing in Mobility Plan, informing Action Plan 2015-2018.” (Transportation Report to Combined Meeting of Council 2014 September 8, p. 1). In addition, Council directed Administration to source funding for the NW-HUB. In the video of the meeting, City staff indicated that the NW-HUB Transit Enhancement Study may not be completed for 3 years. Residents can access further information at the following link:

Click on Item 11.1.1 and you will see supporting documents in the right hand column. The video will automatically advance to that section of the meeting and the discussions with City staff members.

In addition to the NW-HUB issue, there is more diligence required with respect to local traffic in the SSC-ARP Section 6.3 (p. 28).

“6.3.1 Further Analysis and Actions
1 The City will consult with the public and the University Heights Community Association, as well as nearby landowners and institutions such as the Calgary Board of Education, Alberta Health Services, the University of Calgary, and the McMahon Stadium Society in order to:

A. Monitor and, as necessary, address vehicle traffic through calming or diversion within the University Heights community beyond the intersection of Uxbridge Drive NW and Unwin Road NW, including volumes and speeds on Ullrich [sic] Road NW, Udell Road NW, Underhill Drive NW, Usher Road NW, and associated laneways;

C. Monitor and address school-related traffic including drop-off and pickup by both private vehicle and school bus, through signage, and education, as well as site, parking, and driveway design. This should include reviewing the operation of the public laneway between the Sir William Van Horne High School site and the Mary Queen of Peace church and the laneway along the northern boundary of the Plan area.

D. Investigate and consider alternative configurations for the intersection of University Drive NW and 16 Avenue NW and possible impacts on Uxbridge Drive NW and Unwin Road NW, in alignment with any corridor studies undertaken for Crowchild Trail or 16 Avenue NW.”